Since late last week, some much need rain has been falling across portions of Texas. For some cities, the rain totals accumulated in a few days are greater than what they have seen in many months! The table below displays rain totals over the last several days compared to the length of time you have to go back to see similar totals.

See what people are saying about the rain and drought: Houston | San Antonio |Dallas | Waco | Midland 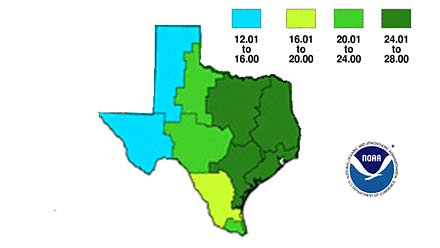 Although the one to three inch rain amounts on the list above are respectable, you can think of it as a drop in the bucket. Much more rain is needed to even put a dent in this historic drought. After all, nearly 88 percent of the Lone Star State is in exceptional drought, the worst category on the U.S. Drought Monitor.

Exactly how much rain is needed to break the drought? Check out the maps below. The first map below shows the rain amounts needed in one month to end the current drought. The green shadings indicate 15 to as much as 24 inches is needed in a single month!

The second map below uses perhaps a more realistic time period of 6 months. The darkest green shading on the second map shows that 24 to 28 inches of rain is needed in the next 6 months to end the current drought!

According to Senior Meteorologist Stu Ostro (Find him on Facebook | Twitter), “One of the primary ways to make a more significant dent in the drought in the southern Plains would be a large, wet tropical storm to move up across the region, like Lee did, but farther west. However, the pattern is very unconducive to that happening.”

One comment on “TEXAS What is Needed To End Drought Conditions”