It is the generational curse we all have been fighting to cleanse ourselves and our families of for many generations past and future. It is the root of all other curses as alcoholism, drug addiction, beatings, murder, rape, incest, etc. We are to bind and break the curse of war into our past family’s tree and into all other curses it has caused. Bind up all that is was or ever has been in the Cellular Memory. Once you see that is in action in prayer then declare cleanse into all connected family’s-in laws out laws, cousins, all their family trees, past, present and future! Plead the Blood Of JESUS over this and then call for complete Blessings, Healings, closure over all wounds that are still open, into every part of the celluar memory for all your family!

Do this untill it is complete, have the faith of pure mustard seed and it will be done! A complete healing for all here now and for the future.

A confirmation that this same awareness is taking place in our fighting force households right now; 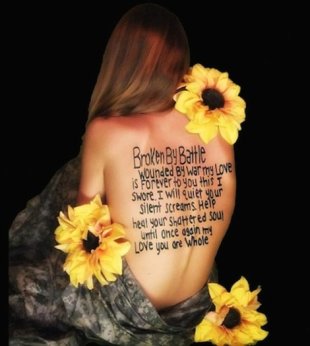 courtesy battlingbare.orgAshley Wise’s husband Rob is about as tough as they come. The career soldier spent 8 years in the Marines before joining the Army after 9/11 and serving on two tours of duty in Iraq, but in April this year, he hit a wall. He locked himself in a hotel room with guns and alcohol and told his wife “he might do something stupid.”

Related: Can Military Families Win the War on Stress?

Thankfully, he came back home alive. Ashley reached out to the Family Advocacy Service at Fort Campbell, Kentucky, where they are currently stationed, and discovered that, like many other soldiers who are suffering from mental anguish or who might have Post Traumatic Stress Disorder (PTSD), finding the help he needed without putting his career in jeopardy would be a struggle. When Wise, believing her conversation to be confidential, divulged to a counselor that Rob had once become physical with her, an MP was immediately brought in. Husband and wife were not allowed contact for 72-hours and Rob now faces domestic assault charges (which Wise is trying to have dropped).

“The last thing a soldier needs is to be separated from his wife,” Wise tells Yahoo! Shine. “Guys kill themselves because they think they are such a burden to their families.” Wise says soldiers avoid telling anyone they are feeling depressed, angry, or even suicidal for fear of being dishonorably discharged. “Take the number of men who actually report having PTSD and multiply that by 50.”

That evening, Wise told a girlfriend, “I want to streak across the 101st command building, because then maybe the general or someone would listen to what I’m saying.” Instead she grabbed an eyeliner pencil and had her friend write these words on her back:

I love you forever,

To you this I swore:

I will quiet your silent screams,

Until once again, my love, you are whole.”

Wise posted a picture of her naked back on Facebook, invited other military wives to share images of themselves, and the organization Battling Bare was born. “Our initial intent was to take Facebook by storm,” says Wise. She says, at heart, she simply wanted families to be able to enjoy normal things together like “eating at Chuck E. Cheese’s or going to the fireworks.” When she spoke to other women and “realized how big the problem is, we knew we had to do something.”

Now, just two months later, Wise is working with seven other military wives to launch a non-profit organization to raise awareness about PTSD and the impact it has on spouses and children. In three years, they aim to have a chapter in every state in place to support military families and hold workshops based on a model developed by Operation Restored Warrior.

e some people are critical of their bold approach–she says she’s had some ugly feedback and got a call from a stranger who called her “an attention grabbing whore”–the military isn’t asking them to take their website or Facebook page down. Wise tells Shine that Battling Bare is “on the Pentagon’s radar,” and when she spoke to Colonel William Gayler, Fort Campbell’s Chief of Staff, he assured her, “I want to fix this.”
Also on Shine:

USE THE POWER OF THE BLOOD OF OUR SAVIOR OUR JESUS TO HEAL AND COMFORT YOU AND WASH THE TRAMA AWAY!
https://naturalrain.wordpress.com/