In some parts of Texas the water supply is dwindling, if not disappearing. Now, state officials are grappling with how to come up with a permanent source of funding for a multi-billion dollar plan to provide drinking…
<a href=”//widget.newsinc.com/single.html?WID=6579&VID=23532538&freewheel=69016&sitesection=weatherchannel_oth”> 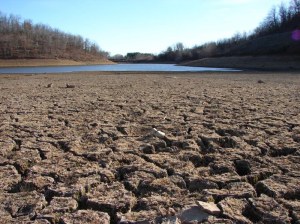 Next month, Texans will go to the polls to decide whether to help the state get part of the way there. If Proposition 2 on the ballot passes, the Texas Water Development Board, the state’s water-planning agency, will be authorized to lend $6 billion via a bond fund dedicated to building and fixing water infrastructure.

proposition, as have some environmental groups.

Enlargephoto by: Robert W. Hart
A pump house at Lake J.B. Thomas sits high and dry with almost no water remaining to pump. The lake level is at 4.60 percent.

“Without adequate funding to implement water strategies and build necessary infrastructure, Texas could face a water shortage in coming decades that would be devastating to our state economy,” said Debbie Hastings, vice president of environmental affairs for the Texas Oil and Gas Association, which supports the proposition, in a statement.

“Our position is that Proposition 2 will save businesses money, not cost businesses money,” said Steve Minick, vice president of government affairs for the Texas Association of Business, which is beginning an educational campaign to encourage support for the proposition.

The idea behind the bond fund is that the TWDB can borrow at extremely low rates because of the state’s good credit, and use that borrowed money to make loans to far smaller groups like local water utilities, which will pay the loans back with interest. (The local groups will find funding from the water and wastewater rates of residents and businesses.) The sole cost to the state, says the TWDB, will be the cost of the election, due to the “self supporting” nature of the ballot measure.

“There’s a lot of entities — especially in this economy, they can’t access the market easily, and definitely less effectively than we can,” said Melanie Callahan, the TWDB’s interim executive administrator. The state’s draft water plan identifies $53 billion in new water-supply needs by 2060, part of an overall need of $231 billion for all water infrastructure by that year.

“The water bonds provide a beneficial purpose, and I have no problem at all with authorizing more bonds as they’re needed,” said Talmadge Heflin, director of the Center for Fiscal Policy at the Texas Public Policy Foundation.

However, he said that the group was concerned about an “evergreen” provision in the measure that means that the TWDB can always have up to $6 billion loaned out, as opposed to a $6 billion all-time cap. In other words, over time, the TWDB could end up lending significantly more than $6 billion, without needing additional authorization.

“The appropriate thing to do is not take the voters out of the loop,” said Heflin, adding that this is the first time an “evergreen” provision has been included in TWDB bonding authority.

But Mike Barnett, an official with the Texas Association of Realtors, said that he welcomed the evergreen provision. “I think that’s a benefit of it, actually, in that it provides a stable source of future funds for these projects,” Barnett said.

Since its creation in 1957, the TWDB has authorized a little over $4 billion in bonding authority and issued about $3.3 billion in bonds, according to Callahan of the TPWD. Of that $3.3 billion, $1 billion has been issued in the last three years, she said, so “we have seen quite an uptick,” she said.

If the measure does not pass, there are other funding sources available, but in limited amounts. “Without the funds provided through Proposition 2, most local entities will not be able to get financing for water-related infrastructure,” the TWDB says.

Minick, of the Texas Association of Business, said that in TWDB’s 50-plus years of running a bond program, “no entity in Texas has ever defaulted on a loan.”

Nonetheless, the fact that the ballot measure comes at a time when the national conversation revolves around paying down debt, rather than accruing more, worries its backers. And indeed some Tea Party groups are starting to weigh in with concerns.

“I do know we need to reserve water supplies and do that type of work, but there is some question as to whether this level of bonded indebtedness is a good idea,” said Mike Openshaw, co-founder of the North Texas Tea Party, who said that he was “still doing some investigational work” on the issue.

Said Minick at the Texas Association of Business: “We’re all concerned about increasing debt of any government of any level, but let’s not confuse this with the angst over recent federal debt issues.” He added: “Rather than having a knee-jerk reaction of fear, we need to look at fact that Texas, as opposed to the federal government and some other states, has done such a good job at protecting its credit rating.”

The beneficiaries of the proposition are customers of water utilities, including small businesses, according to Minick. If the measure doesn’t pass, he said, “you will end up paying more to get the same thing, or paying the same thing to get less.”

“The program that this will be re-funding has been very beneficial to cities, especially smaller cities who may not have the money to do infrastructure,” she said. She added that she had slight concerns that “you don’t know where the money is going,” but that talking with TWDB staff had largely alleviated that. There is no list of entities slated to receive loans; the local groups apply to the TWDB, which grants the loans on a case by case basis.

Hardberger said it seemed unlikely that the money would be used to build reservoirs, which can cost billions and are likely to require additional money from the legislature. She generally opposes reservoirs as “sort of a 1950s approach to a new millennium problem,” whereas fixing leaky water pipes would be an example of a more wiser use of the TWDB fund, she said.

Draft Water Plan Says Texas “Will Not Have Enough”

Every five years, the Texas Water Development Board publishes a water plan for the state. The 295-page draft of the 2012 plan, published last week in the midst of the worst-ever single-year drought Texas has ever experienced, is a sobering read.

“The primary message of the 2012 state water plan is a simple one,” the introduction states. “In serious drought conditions, Texas does not and will not have enough water to meet the needs of its people, and its businesses, and its agricultural enterprises.”

The report is packed with data and projections, but a few stand out. The state population, now 25 million, is expected to increase to 46 million by 2060. During that time, existing water supplies will fall 10 percent as the Ogallala and other aquifers are depleted.

If Texas does not plan ahead, a drought as bad as that of the 1950s could cost Texans $116 billion a year by 2060, the report says, and cause the potential loss of more than one million jobs.

Building new reservoirs and wastewater treatment plants and other water infrastructure is projected to cost $53 billion.

There’s a bit of good news: Demand for water is projected to rise by only 22 percent by 2060 — in other words, less quickly than population growth. That’s partly due to expected declines in agricultural usage.

The report offered a number of recommendations to the Legislature. Texas lawmakers, it said, should get moving on three reservoir sites (Turkey Peak Reservoir, Millers Creek Reservoir Augmentation and Coryell County Reservoir). Lawmakers should also make it easier to site other reservoirs, and to transfer surface water between different areas. They should require public water utilities to audit their water losses annually rather than every five years.

The TWDB also asked lawmakers to remove it from handling petitions protesting the results of a new groundwater planning tool called “desired future conditions,” which refers to the projected health of the aquifer in 50 years.

On climate change, the report states:

The report says that irrigation now accounts for 60 percent of water demand in Texas, but as cities grow its share is expected to drop to 45 percent by 2060.

Some of the TWDB’s projections for “mining,” a category that includes natural gas drilling, “were developed before the boom in natural gas extraction extended to some eastern and southern areas of the state late in the last decade,” the report said.

Draft Water Plan Says Texas “Will Not Have Enough”